“Throw them in with the Sharks!” Mike, our Director of Customer Success, proclaimed.

Riotous laughter erupted in the meeting, and a few wisecracks followed. As the chuckles receded, Ken, one of the company founders, seemed to ponder Mike’s words. “Well…” He thought out loud, “Why not?”

And so the Acorio Shark tank tradition was born!

Fused into Acorio’s culture has always been the need to actively encourage innovation on the job — because capturing innovation at work is the key to maintaining our competitive advantages, keeping a smart team engaged, and helping to support rapid company growth.

The challenge: We got really good at submitting great ideas.

As the team began to grow, so did the number of ideas submitted each month. We began to worry as countless ideas began to “sleep with the fishes.” Quickly, the management team started to develop strategies to capture and execute on these suggestions, which often include ServiceNow technical improvements, customer requests or process improvements, and internal culture or communication suggestions (from healthy snack boxes to a way “kill” emai and make everyone use Slack instead).

The first step was building an app on our internal ServiceNow instance called “Ideas” to track and capture everyone’s recommendations.

Seriously funny brainstorming sessions began, and Acorio was ready for the next step. Or rather, we were ready for our next dive…

So… What is The Acorio Shark Tank?

The Acorio Shark Tank is a monthly meeting to vet innovations throughout the company. Based loosely on the reality TV show of the same name, this is a chance for our team to present new innovations to the leadership team, and vie for allocated investments and time to build out their innovation – as well as 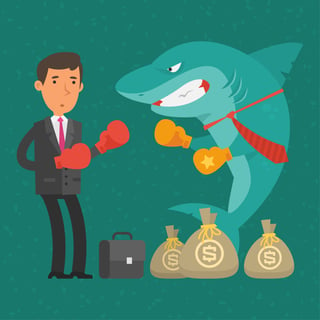 the pride of pitching a successful idea.

For those unfamiliar with the reality television series “Shark Tank,” it is a show in which entrepreneurs tread in the Shark investor waters and see whether their idea will sink or swim, funded or not funded.

And this is exactly what we do. New ServiceNow advances and team innovations are continuously submitted by the (growing) team, and once a month our leadership team chooses two or three of the top two or three ideas, and offers the chance for their sponsors to prepare a presentation — and fight for a chance to get funded. (In our case, offering that employee or team the time and opportunity to take their idea to the next level.)

In just a few short months, a host of Shark Tank ideas have migrated from the presentation level to the real world.

Small ideas are handled by the executive team as they come in, and quickly turned into new business processes.

Before the Shark Tank, many in the team felt they needed a venue to be heard, and often found it difficult to determine the quality and need for some innovations, and how to prioritize these new ideas amid all the other mission-critical business priorities we work on every day.

By implementing Acorio Shark Tank, the entire company can now watch and weigh in on high priority, interesting ideas.  This forum not only brings the entire company onto the same page, but also inspires other teammates to keep up bringing new ideas to the fore.

In the meetings, the group tries to dissect the brave presenter’s idea in a constructive manner. At the same time, these presentations can also serve to inspire additional advances.

Most leave the meetings with a sense of purpose, their brains whirling outward from what they just saw, and eager to collect new creative thoughts that they, themselves might submit – to win their own turn to swim with the sharks.