What a first three weeks of Knowledge this has been! For me, this has always been a time for the community to come together and celebrate. And, even though we are digital now, all the Know20 content year has shown that this year is no exception.

Especially inspirational, to me, are the thousands of innovative companies out there coming together as a community and striving to keep their millions of employees safe. And that, that, is something to celebrate.

But, of course, you ask, what about the Knowledge Parties?? I know I have been missing them this year, and I’m sure you all feel the same. So… we decided to throw one.

But what, exactly, do you do when you’re trying to throw the biggest party of the year… from home? We broke it down into two simple steps and set out from there;

1. Find and invite one of the biggest names in comedy to chat with us.

2. Make sure, whatever we do, it’s all about giving back to those still serving us on the front lines.

I am so excited to officially announce a (slightly revised version of) Acorio’s Annual Knowledge Party, featuring a conversation with Trevor Noah, Acorio Executives, and our wider ServiceNow community.

Attendance for this one-of-a-kind event is free, but during our party, we will be encouraging you all to follow us in making a donation to Doctors without Borders.

This once-in-a-lifetime call has limited seats; be sure to reserve your spot today and join us as we celebrate our community.

Trevor Noah is one of the biggest names in comedy. Trevor received a 2020 Grammy Nomination for Best Comedy Album for “Trevor Noah: Son Of Patricia” and 2020 NAACP Image Award nominations for Outstanding Writing in a Comedy Series and Outstanding Host in a Talk or News/Information (Series or Special). 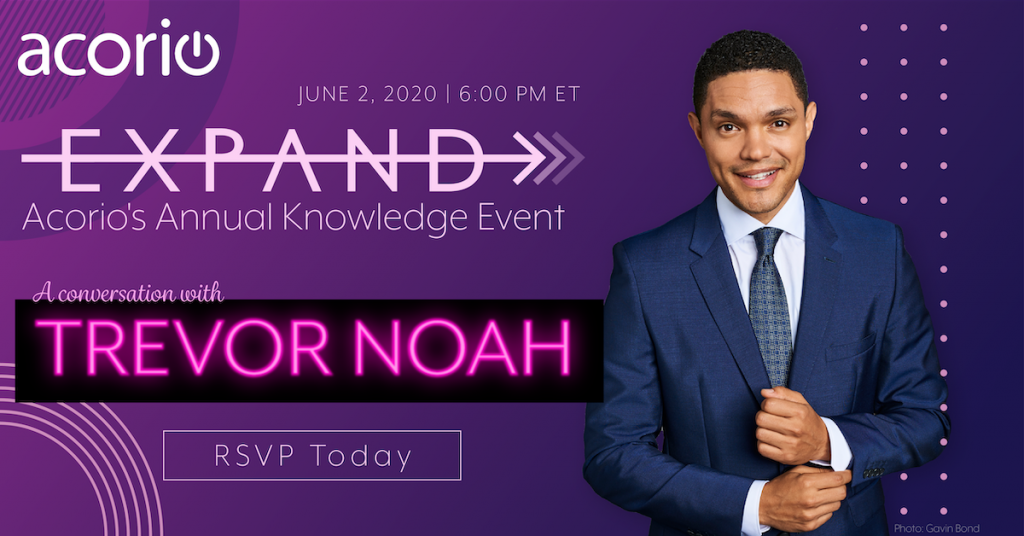