We happen to think that some parts of Christmas should be rushed, like our 12 Days of Giving – our annual content giveaway that *usually* happens in December.

So this July we’re bringing you the very best of Christmas – sped up and delivered straight to your inbox six months early. This month, join us for our first Christmas in July as we bring you:

For day one, we’re setting the stage of ServiceNow by not only giving away our ServiceNow Primer to help you learn the basics of the platform, but also by recapping ServiceNow’s own origin story including key milestones, essential personnel, and major acquisitions that have shaped the platform.

Before ServiceNow was even a whisper in Silicon Valley, there was an enterprise software company called Peregrine Systems Inc. that exclusively sold Asset Management, Change Management, and ITIL-based IT Service Management (ITSM). They went bankrupt in 2005, but before that, they had a CTO named Fred Luddy.

Luddy departed from Peregrine, but not without a few ideas up his sleeve. It was from these ideas that ServiceNow would eventually come to be – after a name change and several years of fighting for capital.

Exactly two weeks before his 50th birthday, Luddy incorporated a company called Glidesoft in the state of California, and for over a year, until mid-2005, he was the only employee. During this year, he concentrated on developing software derived directly from code from Peregrine Systems. Eventually, he went on to hire the first five employees, and then in 2006, they raised $2.5 million in venture capital from JMI Equity. That same year they changed the name from Glidesoft to ServiceNow and opened their first official office building in San Diego.

“I couldn’t wait [to found ServiceNow], because there was something psychologically that said I couldn’t start a company after 50.” – Fred Luddy, Founder, ServiceNow

From that day forward, Luddy was at the reigns of what would quickly become the world’s fastest-growing billion-dollar company. Let’s take a look at a few more critical moments that have defined the growth of ServiceNow.

In June 2012, ServiceNow became a publicly-traded company. As the only company that Morgan Stanley had taken public since Facebook, they had an Initial Public Offering (IPO) of $210 million.

Following their IPO, ServiceNow moved their headquarters from San Diego to Santa Clara and expanded their offices in New York, Atlanta, London, and Frankfurt.

We have documented ServiceNow’s shift across the enterprise software landscape. But what we haven’t talked about is how their move from an IT-dominated business to an extensive organizational offering had been partly defined by their key personnel hires.

Because of their extensive platform and ability to create custom applications, ServiceNow quickly became the fastest-growing billion-dollar company (ever) and was named the #1 Most Innovative Company in the World by Forbes in 2018.

Given their rapid growth, it is no surprise that the Enterprise Service Management powerhouse has chosen to supplement their own expanding technology with additional platforms through acquisitions. Since their first major purchase of Mirror42 in 2013, ServiceNow has had over 10 acquisitions (plus several key investments in other companies, foreshadowing their procurement). Among those, here are three that we think are crucial to the ServiceNow platform we know today:

Outside of these purchases, ServiceNow continues to make regular announcements on new or strengthened partnerships, like with Adobe or Deloitte. In each case, ServiceNow is showing their cards with how they are choosing to shape the platform. Let’s take Adobe for instance. It is clear that the partnership inks the joint goal of empowering companies to create seamless digital workflows and personalized customer experience touchpoints. This goal is almost unrecognizable when you consider where ServiceNow started, as an IT ticketing tool.

A Primer of the Modern ServiceNow Platform

Clearly, ServiceNow’s platform has grown beyond its ITSM roots. Which is why we felt the need to create a ServiceNow Primer, to introduce you (or refresh you) on the new state of ServiceNow, the holistic enterprise cloud platform capable of supporting your employee, customer, and IT teams.

Enjoy your free download of the eBook, and welcome to Christmas in July! We’ll be back tomorrow with more great content. 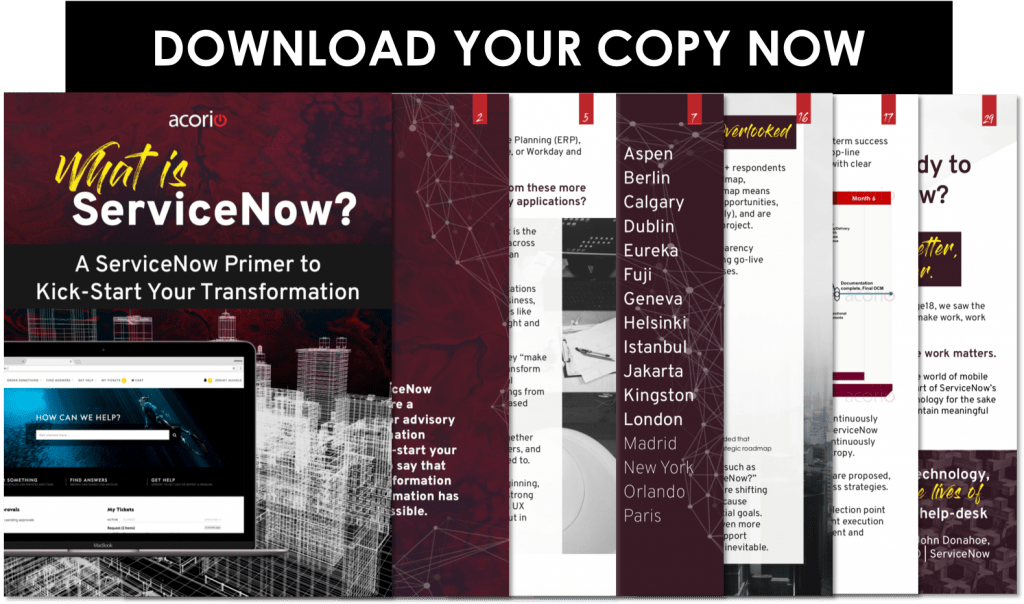