So Fred was right.

I remember our first meeting with ServiceNow at its Solana Beach ‘head quarters.’ It must have been around 2007 or so, but don’t quote me. We were looking for a technology partner that could “automate stuff” for an infrastructure management solution we planned to offer our enterprise customers. 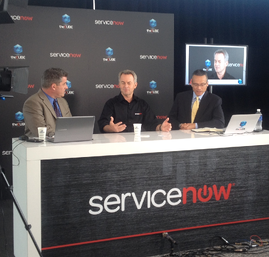 A friend of my co-worker told us about Fred Luddy and what he was developing at a company called ServiceNow. “Service-oriented architecture; it’s the next big thing” he said.  (Yeah ok, whatever).

I didn’t know SOA from DOA. But I was told “you have to meet this guy and see what he’s done.’ (The last time I did that I ended up with two bogus tickets to a Boston Bruins game that didn’t exist.)  I was skeptical to say the least.  My co-workers (engineering types) were giddy at the thought of geeking-out on Solana Beach for the afternoon with an up-and-coming startup. I wanted to gain a fast solution time to market as my organization struggled with building the service ourselves.

As we drove through the streets of what I saw as “a surfer town” (Solana Beach) I was thinking:‘Who are we going to see again? What do these guys do? There are no businesses here,’ I muttered to myself.

We arrived at the now famous ‘space ship’ building that was ServiceNow and walked through the front door. There was hardly a chair in-sight, some sparse furniture, -start-up city.  Out walked Fred Luddy. He struck me as super-positive and very excited. We walked into Fred’s office, and sat down.

And that’s when it happened.

(paraphrased) ‘See, we’ve taken things that used to require days or weeks or even months and reduced them down to minutes.’

Fred had my attention.

He had taken something quite uninteresting (at least to me) actually really boring to be truthful, and immediately stated its business value in plain English.

(to myself) ‘No boxes, no wires. Nothing’s physical, and you consume it as a service. Interesting.’ Fred had accomplished several powerful things at once here.  It was easy. It was intuitive. It just worked. It automated stuff.  There was a ‘rough’ SLA, no formal on-board process and no real partner ‘program’ to speak of. (I was thinking how many other MSPs do these guys have? Will this stuff work?) It didn’t matter. It made things better. It gave people service when they needed it,  -NOW.

Fred’s passion trumped logic. We signed the deal several months later. We were one of the early Managed Services Providers to leverage ServiceNow. We reduced our product time to market by a full year.

Fred either knowingly or unknowingly addressed a shift in American culture (IT or otherwise) where people want instant gratification.  The days of ‘see how big my IT department is’ were waning. Protracted implementation times, tons of boxes, wires, data centers…not cool anymore.  NOW is cool. The timing was right. Fred knew that no one wanted to wait.  They wanted service, now. Manual processes are the cancer to ‘business agility’ as my co-worker loves to say.’ Millennials can’t imagine anything but NOW…

ServiceNow is in a transformational stage. Well, not really. The transformation started from the beginning, back in Solana Beach and probably well before that. Automate stuff: Legal, Human resources, facilities management, finance, governance risk and compliance, lots of hands touch these processes, lots of opportunities to make mistakes lots of time spent going round and round…and round.

The landscape is changing. ‘ITSM tools’ are quickly being replaced by robust, extensible platforms. The lines between SaaS and PaaS are becoming more blurred. Force.com, Amazon, Box, Workday, Concur, ServiceNow, all leading the charge.

My personal belief is we are still squarely at the infancy of ‘cloud’ and ‘as a service.’ The future, from my perspective, is that things in general will be more service-oriented, less boxes, wires and software, more of the ‘things I need NOW. ‘

It’s really just The ServiceNow of things, – and it’s only just begun.